Launde Abbey was founded as an Augustinian priory in 1119 by Richard Basset, a royal official of Henry I. During the first century of its life the community buildings, cloister and garth were built, including an imposing church of which one side chapel still survives, now used as the Chapel at the present-day Abbey.

Thomas Cromwell, Henry VIII’s chief minister responsible for the dissolution of the monasteries, found Launde’s location very desirable. After visiting the priory in April 1540 he wrote in his Remembrances (a kind of personal journal) “Myself for Launde,” although he never occupied the house as he was executed just three months later for treason. His son Gregory, however, had kept royal favour – no doubt helped by his marriage to Elizabeth Seymour, sister to Henry VIII’s beloved wife Jane – and lived at Launde Abbey with Elizabeth for ten years; during this time he had some of the dilapidated monastic buildings restored or rebuilt. Gregory was buried at Launde and a monument erected by his wife remains in the Chapel to this day.

Recently, and as part of our 900 year celebrations, we were treated to a fascinating talk held by historian Diarmaid MacCulloch, and Booker Prize winning novelist, Hilary Mantel. Both speakers enthralled an audience of 320 people as they opened a window on the life of Thomas Cromwell, with his huge significance for Henry VIII’s England and particular connection with Launde Abbey. 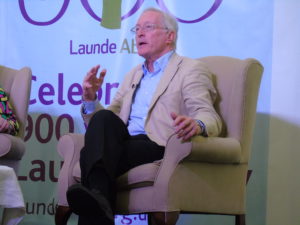 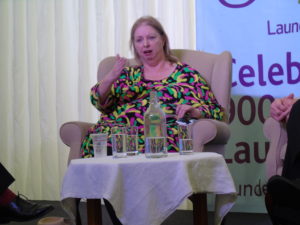 Historian and Novelist brought contrasting but complementary perspectives, and it was fascinating to hear extracts relating to Launde from Hilary’s as yet unpublished third novel, The Mirror and the Light. Without creating any spoilers, in her imagination, Launde had clearly worked its way into Cromwell’s mind, just as it continues to do for many visitors today.

The Cromwell family lived at Launde until the end of the 16th century and then, for the next three centuries, the house passed through the hands of various owners: the Smiths (who probably began the process of dismantling the original monastery and building the present manor house), followed by the Halfords, Clarkes, Simpsons and Dawsons. This latter family engaged Thomas Rickman to embark on an extensive restoration of the house in the mid nineteenth century.

In 1957 the prominent Leicestershire businessman Cecil Coleman, together with his wife Lilian, purchased the abbey and presented it to the Diocese of Leicester. They also paid for the conversion works to make it into a retreat house.