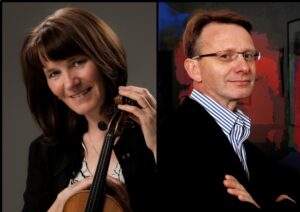 Christine Townsend studied violin at the Royal Academy of Music and went on to pursue a career as a chamber musician and principal orchestral player with the London Philharmonic & City of Birmingham Orchestras.

Stephen Robbings also studied piano at the Royal Academy of Music and won the Academy’s highest award for pianists. He has performed at major venues in the UK, also travelling to Europe, The Far East and the USA & played on BBC Radio & TV. Their recent CD features music by Elgar, Prokofiev & Debussy.

Duo Dunamis have been to Launde several times and have always given us splendid concerts. The acoustics of the chapel where we have the concerts are perfect for the violin.