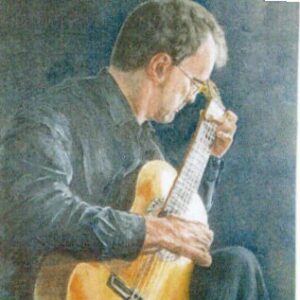 Jonathan Richards started learning the guitar at the age of eight. His first teacher was Frank Humphreys. Later, he studied with John Arran and others, gaining a Trinity College Performer’s Diploma in 1983. Since then, he has given solo and duo recitals nationwide, played guitar on radio and television and taught at school and university levels.

Jonathan has recorded on numerous labels including Sain, Meridian, Divine At and Campion. In addition, his interpretation of Tavener’s “Chant” for guitar is featured on “John Taverner – a Portrait” (Naxos 8.558152-53). Jonathan has composed prolifically including guitar solos, songs, music for flute and guitar, a quartet and “Variations on a French Folk Tune” for guitar and string orchestra. He lives in Colwyn Bay, North Wales with his partner, Deborah.