Classical Concert and Cream Tea: “Threads of Gold” with Tesserae

Tesserae is a SSAA quartet based in the East Midlands. Having sung together for several years as part of the octet Mosaic, they decided to try out some repertoire for upper voices, and they liked what they found. Tesserae enjoy performing a wide range of music, from the sacred to the secular, the age-old to the contemporary, exploring the contrasts and connections between pieces. The name of the group is a nod to their origins in Mosaic: Tesserae are the individual tiles that make up a mosaic image.

Tesserae are all active in choirs across the East Midlands, including the Harborough Singers, Cecilian Singers and Derby Cathedral Choir. As Tesserae, they have sung in venues including St Helen’s, Ashby-de-la-Zouch, Stoneygate Baptist Church, Leicester, and the 2021 Great Bowden Music Fest. Tesserae are excited to be sharing a programme with an audience at Launde Abbey for the first time. 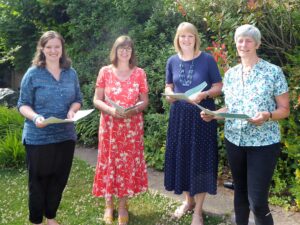 Their Songs will be interspersed with music on the Chapel Organ.