Come and enjoy an Evening of Light Classical Music in the Chapel and Picnic in the Gardens beside Noseley Hall.

“I do hope you will be able to come – this is a fund-raiser promoted by the Friends of Launde Abbey, in aid of Launde Abbey.  Do bring a group of friends with you to Noseley and please pass this information on to others who might be interested.”
Canon Brian Davis BD AKC
Click here to download a poster 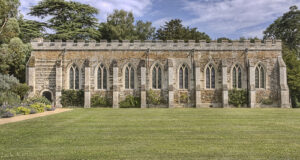 This is a ‘Friends of Launde’ fundraising event (Registered Charity Number 519042) run  in support of Launde Abbey.

Christine Townsend studied violin at the Royal Academy of Music and went on to pursue a career as a chamber musician and principal orchestral player with the London Philharmonic & City of Birmingham Orchestras.

Stephen Robbings also studied piano at the Royal Academy of Music and won the Academy’s highest award for pianists. He has performed at major venues in the UK, also travelling to Europe, The Far East and the USA & played on BBC Radio & TV. Duo Dunamis have given several concerts at Launde Abbey.

Their music will include Vivaldi, Mozart and some jazz pieces.

Harry is a young man with a wide choral experience and has been teaching music at Oakham School. He has sung as a VOCES8 Scholar and regularly with the cathedral choirs of Lincoln and Southwell, including for commercial recordings and radio broadcasts. He and  Alan gave a splendid recital at Launde Abbey in April this year.

Alan is an accomplished soloist who has given concerts throughout the UK. Whether performing the complete lute works of J.S. Bach, or sharing the stage with very varying artists, Alan has been devoted to exploring the guitar’s many personalities and sonic possibilities. He has given several solo concerts at Launde Abbey.

Their music will include Where’er you walk (Handel), It Was a Lover and His Lass (Thomas Morley),  English folk songs (Britten)  and some opera favourites.